US financial markets ended the week mixed.  Mega-cap Growth stocks pushed the S&P 500 and Nasdaq to another set of all-time highs while cyclical issues and small caps lagged, hindering the Dow and Russell 2000’s performance.  In Washington, the 1.2 trillion dollar infrastructure bill was signed into law. The 1.75 trillion dollar “Build Back Better” plan passed the lower House despite the CBO’s finding that the program would render an increased deficit over the next decade.  The bill now goes to the Senate, which is likely to amend it and send it back to the House.  Also, in Washington, news that a decision on who will be nominated to be Chairman of the Federal Reserve is imminent came from several sources. It appeared to be either current Fed Chair Jerome Powell or Fed Governor Lael Brainard.  The decision comes with multiple vacancies within the Federal Reserve Board of Governors and will undoubtedly impact markets. 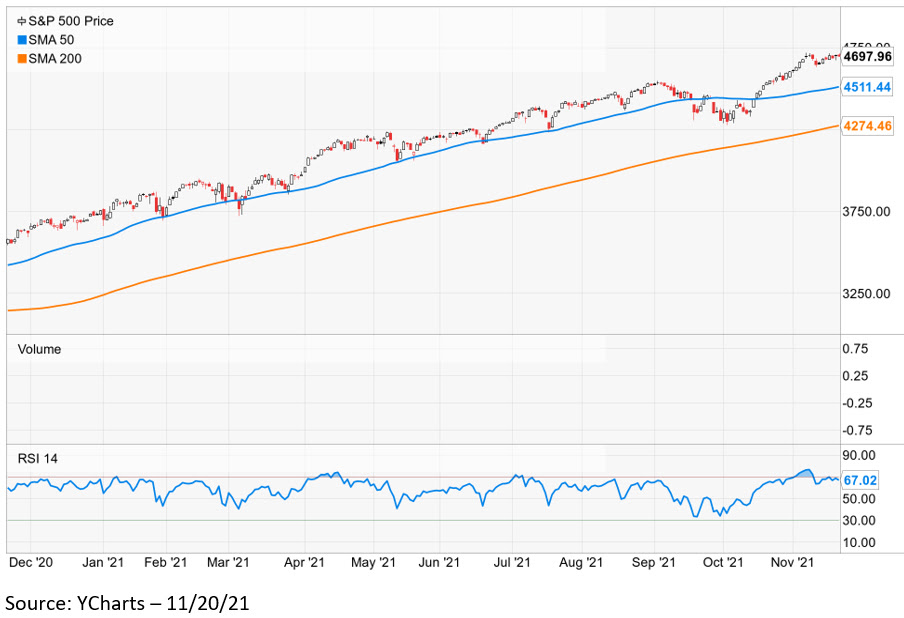 In Europe, Austria announced that it would institute a nationwide lockdown due to a surge in Covid infections.  The announcement dampened investor sentiment and helped to curb the reflation trade.  Germany and the UK are also experiencing increased infection rates.  That said, Pfizer and Moderna both received FDA approval for the use of booster shots for adults 18 and older after six months of being fully vaccinated.  Other corporate highlights included NVidia’s stellar earnings report and forecasts that topped analysts’ expectations. The stock price increased nearly 10% on the week.  Walmart and Target both had better than expected earnings but showed margin compression, which sent shares lower.  Both retailers acknowledged that they did not pass on increased prices to the consumer, which cut into their margins.  On the economic front, data for the week was solid and headlined by a better-than-expected retail sales print.

Retail Sales for October came in at 1.7% versus expectations of 1.5% and were better than the prior months reading of 0.8%.  Industrial production for October increased to 1.6% from a negative 1.3% in September and beat the expectation of 1%.  Housing Starts missed the mark by a tad coming in at 1520k versus the consensus estimate of 1576k, while Building Permits were a bit better at 1650k versus 1620k.  Initial Claims and Continuing Claims continued to trend in the right direction coming in at 268k and 2.080M, respectively.

Investment advisory services offered through Foundations Investment Advisors, LLC (“FIA”), an SEC registered investment adviser. FIA’s Darren Leavitt authors this commentary which may include information and statistical data obtained from and/or prepared by third party sources that FIA deems reliable but in no way does FIA guarantee the accuracy or completeness.  All such third party information and statistical data contained herein is subject to change without notice.  Nothing herein constitutes legal, tax or investment advice or any recommendation that any security, portfolio of securities, or investment strategy is suitable for any specific person.  Personal investment advice can only be rendered after the engagement of FIA for services, execution of required documentation, including receipt of required disclosures.  All investments involvement risk and past performance is no guarantee of future results. For registration information on FIA, please go to https://adviserinfo.sec.gov/ and search by our firm name or by our CRD #175083. Advisory services are only offered to clients or prospective clients where FIA and its representatives are properly licensed or exempted.