US equity markets fell across the board as global central banks moved to decrease their quantitative easing initiatives.  In the US, the Federal Reserve announced that it would double the pace of its taper to $30 billion a month and conclude its asset purchase program by the end of March 2022.  The Fed kept its policy rate in place but revealed their dot plot that forecasts three rate increases in 2022.  The Bank of England surprised the market with a 15 basis point increase in their policy rate.  The European Central Bank laid out its plan to taper, but its asset purchasing plan will remain in place until at least 2023.  The Bank of Japan, as expected, did nothing to its policy rate but did announce a plan to reduce its amount of “emergency” purchases.  The differences in global central bank policy will be a significant theme to watch in the coming year and will undoubtedly influence multiple asset classes.

Concerns over the economic recovery due to the rapid spread of the Omicron variant continued to impact markets.  A South African study indicated that Omicron spread 70% faster than the Delta variant, but the illness was less severe, and hospitalization rates were much lower.  There was also news that the Chinese developed Sinovac vaccine appeared to be ineffective against the Omicron variant. The CDC announced that it preferred the Pfizer and Moderna vaccine over Johnson and Johnson’s vaccine because of higher efficacy rates and fewer adverse effects.  The corporate world also took notice of the variant, with several companies delaying the timing of employees coming back to the office.  Economic data released over the week was mixed. 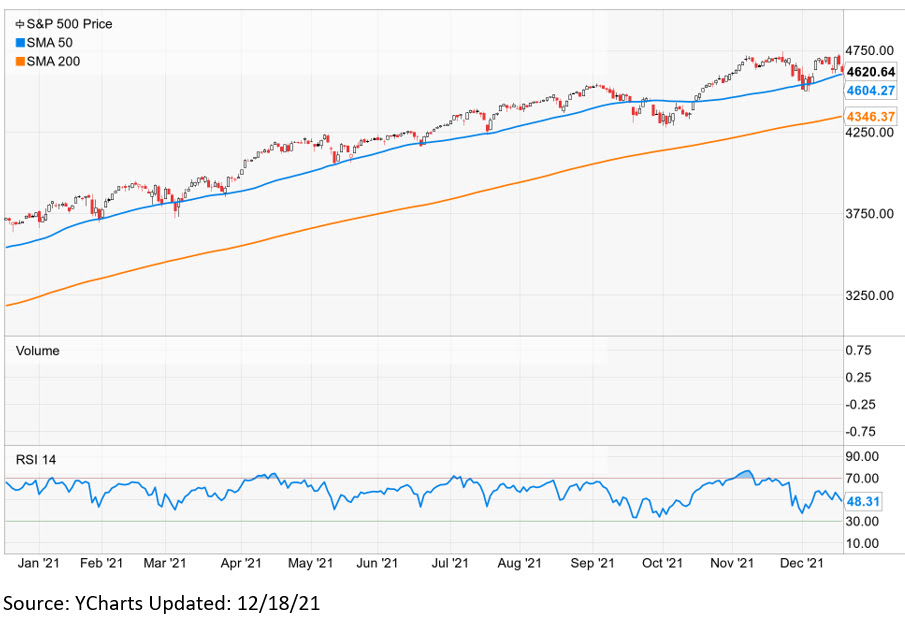 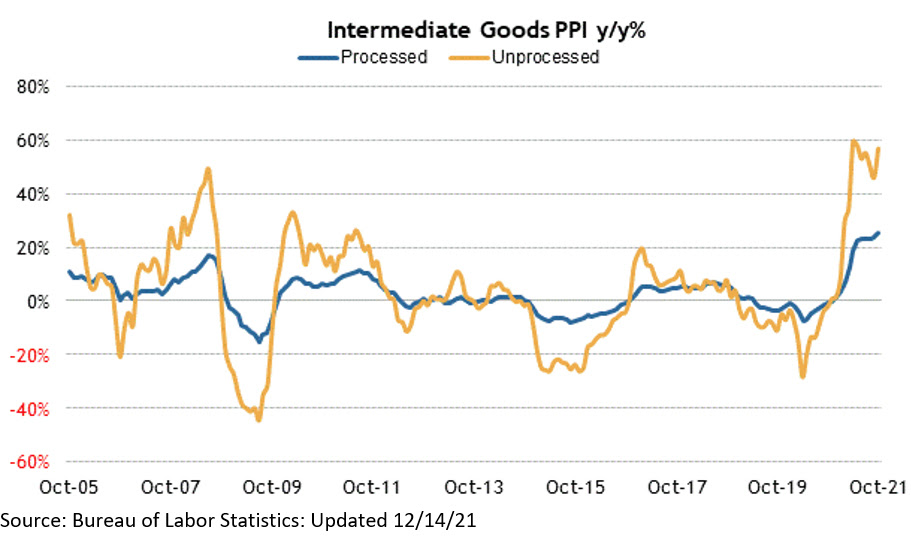 Economic data was highlighted by the Producer Price Index, which came across higher on both the headline and Core.  Headline PPI came in at 0.8% versus expectations of 0.5% and was up 9.6% year-over-year.  The Core PPI came in at 0.7% versus the consensus estimate of 0.4% and was up 7.7% year-over-year.  Retail Sales for November missed the mark coming in at just 0.3%; the street was looking for 1%.  The miss in sales may be due to demand being pulled forward due to perceived supply constraints.  November housing data was better than expected.  Housing Starts came in at 1679K versus the estimate of 1560K, and Building Permits came in at 1712k versus 1620K.  Initial Claims move up a bit in the prior week to 206K economists were looking for 192k.  Continuing Claims improved, coming in at 1.845 million, down from the last week’s reading of 1.999 million.

Investment advisory services offered through Foundations Investment Advisors, LLC (“FIA”), an SEC registered investment adviser. FIA’s Darren Leavitt authors this commentary which may include information and statistical data obtained from and/or prepared by third party sources that FIA deems reliable but in no way does FIA guarantee the accuracy or completeness.  All such third party information and statistical data contained herein is subject to change without notice.  Nothing herein constitutes legal, tax or investment advice or any recommendation that any security, portfolio of securities, or investment strategy is suitable for any specific person.  Personal investment advice can only be rendered after the engagement of FIA for services, execution of required documentation, including receipt of required disclosures.  All investments involvement risk and past performance is no guarantee of future results. For registration information on FIA, please go to https://adviserinfo.sec.gov/ and search by our firm name or by our CRD #175083. Advisory services are only offered to clients or prospective clients where FIA and its representatives are properly licensed or exempted.