Financial markets rallied last week, putting an end to four straight weeks of losses.  Investor optimism was stoked early in the week on news that the Administration and Democrats were working on a fiscal stimulus compromise.  Oversold conditions also prompted technical buying.  The first presidential debate yielded very little in policy clarification but instead demonstrated how ugly American politics have become.  On Friday, markets fell on news that President Trump and the First Lady had contracted Covid-19.  Additionally, it appears that many members of the administration and at least two Republican senators have also contracted the virus.  The week’s economic data was mixed with mixed signals coming from the employment situation report, initial claims, and continuing claims. 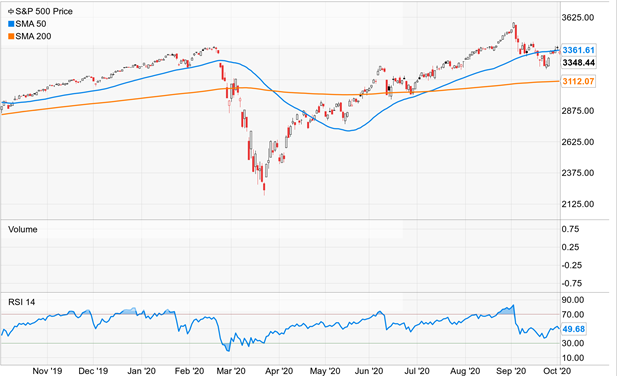 Markets started the week on solid footing after Nancy Pelosi suggested that a fiscal stimulus deal was still possible to attain.  Treasury Secretary Mnuchin also telegraphed the possibility of a deal.  However, by the end of the week, Pelosi’s 2.2 billion dollar proposal was dead on arrival.  A deal now appears to be more unlikely than ever given the current state of Washington.  News that the President has fallen ill to the coronavirus along with some of his staff and republican senators cast even more uncertainty on the election, a fiscal stimulus deal, and the Supreme Court confirmation hearings for Judge Amy Coney Barrett.  Market participants will undoubtedly monitor the President’s health, which will likely continue to influence the markets in the coming weeks.

The much anticipated September Employment situation report showed that Non-Farm Payrolls increased 661k, which was below expectations of 800k.  The Unemployment rate fell to 7.9% from the prior reading of 8.4%.  Initial claims for the week came in at 837k, which was slightly better than the 850k expected.   Continuing Claims continued its downward trend coming in at 11.767 million from the prior week’s 13.1274 million.   ISM Manufacturing came in at 55.4 versus expectations of 56.  We will receive ISM non-manufacturing data on Monday.